It got really cold last night. The central heating in this caravan can only be turned on for up to two hours at a time and there's no thermostat, so when it turns itself off, if you don't get up and turn it back on, it stays off. Paul and I each had two thick blankets on our bed to keep warm through the night. Needless to say, I started the morning with a hot mug of tea!

It rained off and on all day, but the temperature was quite warm. Paul and I walked to the outdoor market and had a bit of a look around. There wasn't much there, but Paul picked out a small spinning top toy and I grabbed some yummy cakes for us to eat through the week (marzipan is yummy). Before we left the market, Paul asked for an orange slushie, which I bought as a reward for him being good.

After the market we walked through town and went to Home Bargains and then Iceland for a frozen food shop. We found the Scala Cinema and I plan on us going there sometime during the week to watch a film. Hopefully Paul will like it as he's not been in a cinema since he was about four years old. We got lots of yummy foods and drinks to hopefully last us the week. Although at the rate Paul is going through the fruit and snacks we'll have to make another small shopping trip Tuesday or Wednesday!

Because of the rain, we stayed the rest of the day in the caravan. Paul watched television and played with his bubbles and spinning top (and snacked nearly nonstop) and I drank tea and played Dragon Age on my laptop (it  just  plays it). Paul also decorated my travelling notebook with stickers - Bob the Builder stickers, no less.

Here are the photos for today. The first one is Paul outside Iceland, the second is of the church spire just visible from the Iceland car park. The others I think you can figure out on your own. 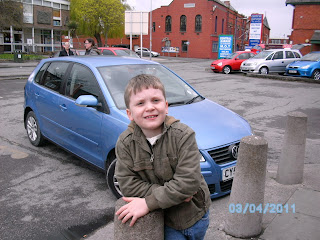 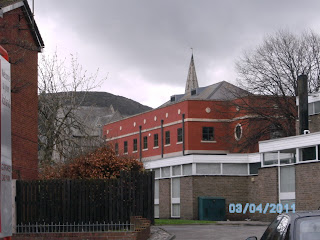 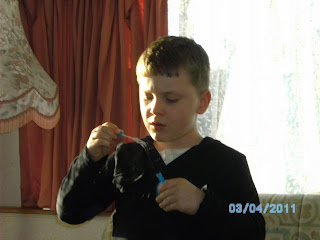 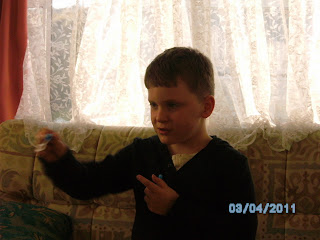 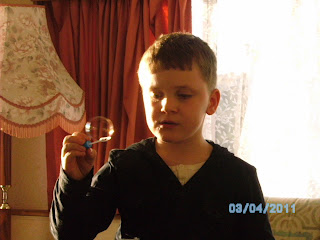 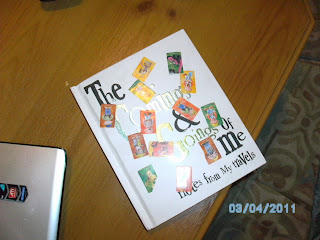