Yesterday we went to Nova, a gym/swimming centre near where we're staying. Its pretty nice and wasn't very crowded at all. Paul's favourite thing was the frog slide in the shallow pool. He played on it nearly the entire hour we were there! He wanted to go into the big pool, but me not being a strong swimmer, I decided it was best that we stay in the shallow pool. Mostly for my nerves, more than anything! Nova also has a rather large orange water slide that Paul was just itching to go on. However, he was half an inch too short to be able to use it. Maybe next year! The entry price was really good! I had expected to have to pay for both me and Paul, but since he's autistic and is considered to be disabled, we were only charged for him to get in and I got in free as his carer.

Today we took it easy and relaxed in the caravan. I took a couple of photos of the more interesting views from the caravan we are staying in. One is from the living room and is of a sand dune with a fence on top of it. Just a few yards from there is the beach, so we are really very close to it! The second photo is the view from Paul's bedroom window.

Tomorrow we plan on going to the arcade, since Paul has been asking to go there all week. I now have a handful of change, so he'll have plenty of money to spend on games and such there. Hopefully I'll have a few more interesting photos to share by then! 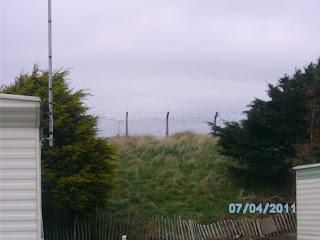 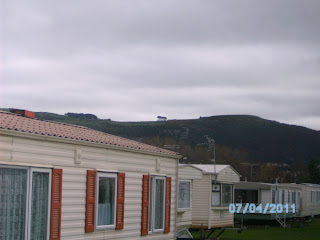