Not much was done today. Paul and I stayed in the caravan until after lunch (we had popcorn chicken, if you're curious). Paul was dead set against going to the cinema this evening, so after lunch we walked into town and did some shopping. I bought some clothing and a bottle of chocolate-orange scented shower gel from Ethel Austin. Paul chose a magnetic photo frame snow globe and a loop-the-loop car race set (a very small one) from the same store.

Since Paul was adamant that he didn't want to go to the cinema, we instead went to Blockbusters where he chose Space Chimps 2

and I grabbed How to Train Your Dragon

and Prince of Persia

on DVD. I had hoped that he would want to watch one of the DVDs tonight in lieu of the cinema, but he chose to watch CBeeBies instead. Oh well, we have until Friday night to watch them and we can always take them home with us, since they were pre-owned.

We also took advantage of being in town to get a bit more food shopping done. Hopefully we're all set for the rest of the week, although at the rate Paul goes through food, we'll probably need to do another small shop by Thursday.

Today's photos are the view of the hills from town, Paul playing with his car track, and tonight's sunset. 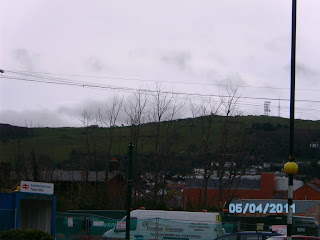 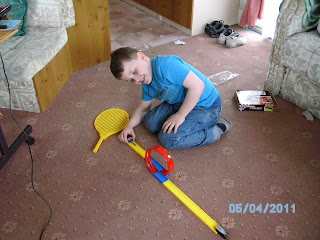 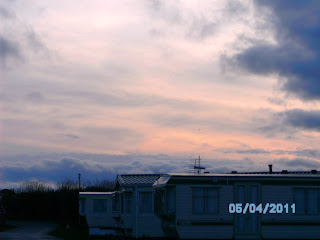 Tomorrow Paul wants to go swimming. The local baths don't open until 5pm though. Hopefully he can wait that long!
Posted by Muir Dragonne at 21:15