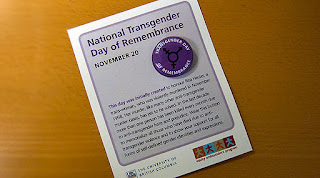 Today is the 13th Annual Transgender Day of Remembrance. This day was created to memorialise those who were killed due to anti-transgender hatred or prejudice.

In the last year, transphobic crimes have gone up world wide by over 30%. The majority of these have been committed in Latin America, although there have also been murders in the United States of America, Pakistan, and Uganda.  Some sources put the number of murders world wide in last year around 220, which means that there is a transphobic murder approximately every 39 hours. If we add to this number the amount of physical harm crimes against transgender people (transgender people are often physically assaulted for using public restrooms, going into pubs/clubs, or just walking down the street), and the number of transgender people who commit suicide, the numbers would easily quadruple.

The really sad thing is this vast number could easily be drastically reduced by everyone doing just a few things. First of all, family of transgender people, I can not express enough how important it is for you to accept and love your child, sibling, grandchild when they "come out" as transgender. Do not disown them, do not tell them they are going to hell, do not blame their friends or their school. Love them, accept them, and support them. Those three things are so important to transgender people. Stand up for those trans people you may come across out in public, especially if they are being abused or assaulted. Friends of trans people, let them know that you are their friend no matter what and will be there for them, supporting them all the way.

If we all band together, both trans people and trans allies, hopefully transphobic crimes will decrease by next year. At the very least, more people will be educated about the issue. That's where it all starts, with knowledge. The more that people know, the less discrimination there will be.