Earlier today, while I was plinking away at the Curiosity cube on my iPod, I noticed that I had a friend request on Facebook from someone whom I didn't know. Usually when this happens it's from someone who follows me on Twitter or someone with whom I have interacted with on another website and they usually send me a private message saying who they are and where they know me from.

With this in mind, I checked my "other" message box on Facebook to see if this stranger had done so. He hadn't, but surprisingly there was another message in my "other" inbox from yet another person whom I don't know. This extremely lovely individual (please read that with sarcasm thick enough to use as a winter coat) somehow thought that she couldn't rest until she called me an "ABOMINATION to God", insulted my reading skills and questioned my gender identity. How loving of her, right?

Normally, I would just roll my eyes at the poor holier than thou moron and delete the message. This time however, since she went to the trouble of sending me a private message, I decided to respond. She then responded back, quoting two of the infamous "clobber" passages (Leviticus 20:13 and 1 Corinthians 6:9-11) both of which Xtians love to quote out of context for some reason. My original response to her must have really hit a nerve though, because she blocked me. Not surprising really; Xtians love to call out other people for their "sins", but when someone else rationally points out to them that they are, in fact sinning by calling people "abominations", they don't seem to like it much. Pot, kettle; can't stand the heat and all that.

Anyway, here is a screen of her original message and my slightly trolling response. I didn't include her response to me as it was just her saying "I'm not judging, these are God's words" and a copy/paste of the two aforementioned, out of context verses. If there are any reading this who find offence with my slightly trolling and/or snarky response, I do apologise for you being offended. Saying that however, there really isn't any other way of responding to people like this woman. They say these things to LGBT people day in and day out, yet refuse to even think that what they're saying is hurtful and harmful. 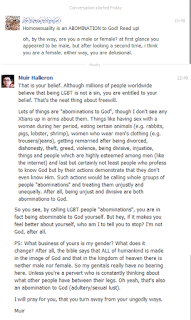 For those of you who can't access the image or find it difficult to read text in images, below is a copy/paste of the conversation/

Homosexuality is an ABOMINATION to God! Read up!

oh, by the way, are you a male or female? at first glance you appeared to be male, but after looking a second time, i think you are a female. either way, you are delusional.

That is your belief. Although millions of people worldwide believe that being LGBT is not a sin, you are entitled to your belief. That's the neat thing about freewill.

Lots of things are "abominations to God", though I don't see any Xtians up in arms about them. Things like having sex with a woman during her period, eating certain animals (e.g. rabbits, pigs, lobster, shrimp), women who wear men's clothing (e.g. trousers/jeans), getting remarried after being divorced, dishonesty, theft, greed, violence, being divisive, injustice, things and people which are highly esteemed among men (like the internet) and last but certainly not least people who profess to know God but by their actions demonstrate that they don't even know Him. Such actions would be calling whole groups of people "abominations" and treating them unjustly and unequally. After all, being unjust and divisive are both abominations to God.

So you see, by calling LGBT people "abominations", you are in fact being abominable to God yourself. But hey, if it makes you feel better about yourself, who am I to tell you to stop? I'm not God, after all.

PS: What business of yours is my gender? What does it change? After all, the bible says that ALL of humankind is made in the image of God and that in the kingdom of heaven there is neither male nor female. So my genitals really have no bearing here. Unless you're a pervert who is constantly thinking about what other people have between their legs. Oh yeah, that's also an abomination to God (adultery/sexual lust).

I will pray for you, that you turn away from your ungodly ways.