Between Walls - PoemTalk, ModPo and Poetry 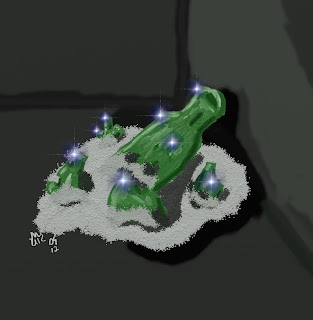 In addition to going through the suggested further readings of Coursera's Modern and Contemporary American Poetry course (ModPo), I'm also slowly going through the nearly 60 (to date) episodes of PoemTalk which is hosted by ModPo's professor, Al Filreis.

In Episode 1 they talk about a poem that we covered in week 3 of the course, "Between Walls" by William Carlos Williams. This poem is considered to be an imagist poem or a poem which causes you to see, in your imagination, the exact object which the poem is about. I highly recommend that you go to the episode page and listen to the podcast as it really adds insight to the poem.

In "Between Walls", WCW mentions "...cinders/ in which shine/ the broken/ pieces of a green/ bottle". Cinders are soft ashes with bits of charcoal in them. Sometimes, if they are fresh, the pieces of coal will still be warm or even still be slightly glowing. Whereas the pieces of glass would normally be cold, sharp, and brittle. If you put them together, you get pieces of glass, warmed by the cinders and reflecting the glow of the embers which would probably give the glass the appearance of glowing on it's own from a distance. To me, this is an image of beauty found in what is usually considered litter and ugliness. This poem reminds us that beauty can be found in the most unlikely of places.

"It seems that he tries to find beauty in unexpected places. Art tries to become new. Poets try to search for new ways of expression. Even the poem seems to be fragmented, broken like the glass..." - Irina-Ana

"A thought that struck me when rereading the poem after the video discussion was that everything in the back wings of that hospital is dead/black/gray/broken. The very detail that adds some color (the color of hope!) into that environment is produced by something that itself is completely broken (broken glass)." - Stefaan


Also, I see the shards of glass as a form of flower. Is the glass alive? No, but the way the shards are arranged and with the light shining upon it, making it sparkle and shine with the hope of new life is a form of life itself!

""Shine" is really positive in this poem. Fragments can be alive!" - Al

"I, too, see the green fragments as something positive, as if from something broken new life can arise and grow. Someone experiences a shattering effect, yet they can pick up their pieces, redefine (reassemble) themselves, and go forward with a renewed sense of hope and purpose. The light shining on the pieces is much like sunlight, warming, invigorating, hopeful, and encouraging. When you feel warmth within you, you grow, just like a buried seed feels the sun's warmth and extends its roots and grows. The fact that Williams locates this "action" in a place where nothing grows enhances the hopefulness in the poem's message, saying that while it may seem improbable, it is not impossible. Life can prevail." - Janet